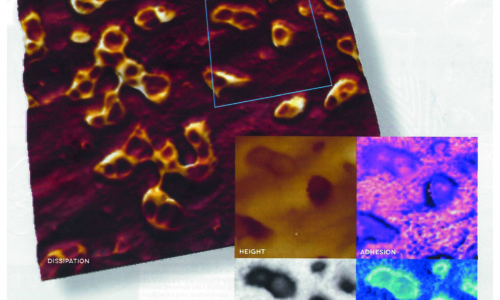 Recently Prior Scientific’s CEO Tom Freda, was interview by Microscopy & Analysis editor Rebecca Pool. The article focuses on the company journey to the present day and the impact he has had in his time with Prior, this will be published in the latest edition of the magazine (Sept/Oct 2019). 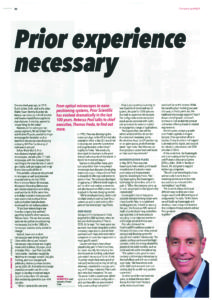 You can also read the full article below:

One hundred years ago, in 1919, Dutch airline, KLM, took to the skies, Walter Owen Bentley founded his famous car company in North London and Sweden-based home appliance manufacturer, Electrolux, opened to ‘shape living for the better’.
However, in the same year, two young engineers, Walter Robert Prior and Andrew Physicks, wanted to shape microscopy for the better, and so launched microscope manufacturing company, WR Prior Co. An array of instruments ensued.
Before World War II, Prior manufactured myriad optical microscopes, including the “C” limb microscope, with the company then switching to the manufacture of optical gun sights, tank periscopes and range finders during World War II.
Post-wartime, a focus on educational microscopes as well as accessories resumed and by the late 1960s Prior’s Science Master Microscope, Monocular Dissecting Microscope and micromanipulators were being used worldwide. At the same time, a modular inverted microscope with cine-camera and a unique tissue culture chamber had also been developed for cell culture analysis.
“It has been interesting to see how the company has evolved,” says Prior Scientific chief executive, Thomas Freda. “For our first seventy years we focused on manufacturing microscopes, but in the 1980s the microscope business really started to change.”
Indeed, lower-cost student microscopes were emerging from China while clinical and research microscope manufacture was largely dominated by Nikon, Olympus, Leica and Zeiss.

“We really have to keep re-inventing ourselves to ensure that our products are relevant in the marketplace.” Thomas Freda, CEO, Prior.

Prior – now Prior Scientific Instruments – had been bought by McArthur microscope investor, Douglas Fielding, and soon merged with polarising microscope manufacturer, James Swift, UK. And while microscope manufacture continued,  Prior also began to develop motorised stages spurred on by a local UK company that needed equipment to scan milk samples.
“When I came to the company in 1993, Prior was developing this motorised stage in the UK but had also opened an office in the US. I was hired to develop and grow the automation and stage business in the States,” highlights Freda. “We eventually developed the business to the point that we had a majority of the market in the US for motorised stages.”
Success continued for many years but competition from heavyweight microscope manufacturers developing motorised stages in-house forced Prior to diversify its offerings and evolve its product lines.
The company developed a huge array of different-sized stages as well as other automation accessories, and also focused on OEM partnerships to adjust to the ever changing market.
“We’ve developed many custom and standard products such as laser focus systems as well as automating other parts of the microscope,” says Freda.
Set against this background, Freda targeted the OEM business, when he became chief executive of Prior in 2015.
As he says: “For many years our products have been integrated to other company’s equipment, and we have partnered with many instrumentation companies to customise equipment to meet specific needs.”
Customised stages have always played a key part in Prior’s business, but more recently, the company has also focused on building customised automated microscopes for its clients.
“A partner might have had a proof-of-concept [microscope] or may be selling what was a standard microscope with, say, an XY stage, motorised filter turret and motorised nosepiece,” he says. “So we will build a customised optical system in their chosen configuration… and can then offer an own-branded fully automated optical system.”
Prior is also currently launching its new OpenStand motorised optical system, designed for OEM partners that wish to customise microscopes.
The configurable motorised optical stand can be combined with optics and accessories to create an optical microscope for a range of applications.
“We figured that users will be able to write all of their drivers for the motorised nosepiece, turret, illumination, focus, and XY positioning on an open source, proof-of-concept stand,” says Freda. “And then we can then produce a customised unit based in their exact requirements.”
Diversification plans
In May 2018, Prior acquired Queensgate Instruments, a UK-based manufacturer of precision nano-positioning and measurement systems.
According to Freda, Prior had been eyeing the Queensgate’s technology for some time, and as he puts it: “When the company came up for sale, we jumped on the opportunity immediately.”
Queensgate’s closed loop piezo actuated nanopositioning stages were a key draw for Prior, to supplement existing products.
Indeed, in January this year, the Nanoscan NPC series of multi-channel closed loop controllers was launched, and more products including a new objective positioner and Z-stage are set to follow soon.
Prior also delivered the PureFocus850 autofocus system in February this year, a real-time, precise and accurate focusing system for upright and inverted microscopes.
The system can focus on transmitted light samples, and is also being adopted by players in industrial markets, such as semiconductor wafer manufacturing.
“The system is also great for users carrying out time-lapse microscopy as thermal effects and drift are removed,” says Freda. “We have demo-units in the field right now and users are coming back to us with very positive comments.”
So what could the next hundred years, or at least the near-term future, hold for Prior?
Products aside, more acquisitions could well be on the horizon.
While the overall optical market grows year after year, as Freda points out, the traditional microscope segment ‘hasn’t shown a lot of growth’, so he will continue to look to diversify product and service offerings based on market requirements.
And of course, company growth is on Freda’s agenda. In August last year, Prior opened an office in Suzhou, China, to service and support customers in this region, and expand its industrial, educational, and OEM activities in China.
At the same time, the Queensgate arm is re-locating to the Electronics and Photonics Innovation Centre (EPIC), a £8M, 3834 m2 facility in Devon, UK, designed to support technology companies.
“We are in an interesting business and we really have to keep re-inventing ourselves to ensure that our products are relevant in the marketplace,” says Freda.
“For us we’re always looking at different ways to drive and move stages around with different types of components,” he adds. “In the future we will build up Queensgate and develop a more integrated business that combines these products and our Prior products together.”