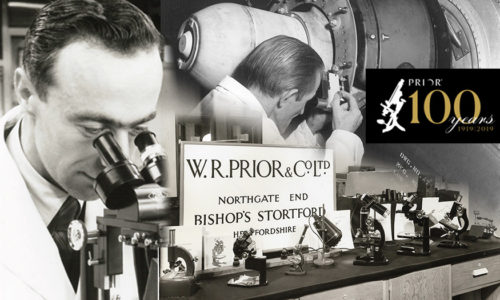 Prior Scientific Instruments Ltd marks its 100th anniversary of the company’s founding in 1919, a rare achievement in today’s business climate.

“This is a proud time for the company and illustrates our resiliency and adaptability.  We look forward to the next 100 years and the developments that we can bring to our markets”, said Thomas Freda, CEO of Prior Scientific.  “Prior is a very different company from what it was 100, 50, or even 10 years ago. We have evolved from an educational microscope manufacturer to a trusted producer and supplier of precision positioning equipment, opto-mechanical devices, and custom designed OEM products.”

W.R.Prior Co Ltd was founded in London, in 1919, by Walter Robert Prior and Andrew Physicks, as a manufacturer of microscopes. The Blitz in 1941 destroyed the factory building and the company moved to a new facility in Bishop Stortford in 1942.  In 1978, Douglas Fielding, who had been an investor in the McArthur microscope, purchased W.R. Prior and Co., who was manufacturing the McArthur microscope under contract from John McArthur. The name was then changed to Prior Scientific Instruments, Ltd.  A few years later, Mr. Fielding purchased James Swift & Sons, a leading polarizing microscope manufacturer and merged it in with Prior.  Prior relocated to its present home in Fulbourn, Cambridge in 1988.  The company expanded its presence in the USA in 1991 with a facility in Rockland, Massachusetts which is now also a key manufacturing facility for the company.  More recently, Prior acquired Queensgate Instruments, a leading nanotechnology equipment company based in Torquay, UK.

In the last decade, the company has opened offices around the globe: Jena, Germany: Tokyo, Japan and Suzhou, China, to increase its global reach and better serve its partners and customers. The current primary shareholders, Myles, James, and Fintan Fielding have been active in the promotion of the growth and long term success of Prior.

Prior has well over 100 employees globally and this year looks to celebrate with customers and suppliers all over the world. Celebrations will be held at exhibitions including MMC, in Manchester, Laser World of Photonics, in Shanghai and Munich, JASIS, in Tokyo, and Neuroscience in Chicago. A celebratory cocktail event, at Swynford Manor, will be the highlight of a busy year, and several internal events will cap off what is sure to be a great year for Prior.

CTO Stuart Jarvis said, “Prior has a great history, both locally and around the world, and I feel very privileged to be part of the Prior team that will be marking 100 years in business. I very much look forward to celebrating this milestone with colleagues, both past and present, who have all made such an important contribution to the success of Prior Scientific”.